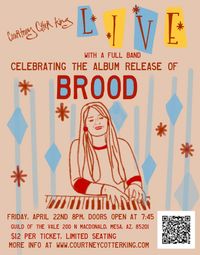 Join Courtney Cotter King at the Guild of the Vale (formerly Woman's Club of Mesa) to celebrate the release of her new album with a full-band performance.

Courtney will be doing an exclusive Meet & Greet and Q&A for Kickstarter supports starting at 7pm (more info in the kickstarter email updates).

Doors open at 7:45 for the general public, and the show starts at 8pm. Seating is limited so grab your ticket now.

"As the baby of six, Courtney was born with a large in-house audience of listeners. She credits her ‘brood’ with helping her write this collection of songs about family relationships, both the one she came from and the one she’s creating now with her husband and three young kids and a fourth on the way.

Each song from Brood has a personality that stands alone, while cohesive album artwork and videos will weave the theme throughout. Courtney said, “aside from sheer enjoyment of the artistry of the album, I hope a feel can emerge that empowers listeners that family relationships are worth whatever it takes and that it’s possible to live a big dream while still enjoying the sweetness of baring babies”.

She’s a live off the land, give glory to God kind of gal with a passion for the 60’s-70’s, family dance-parties and supporting other artists at their craft."